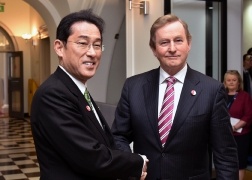 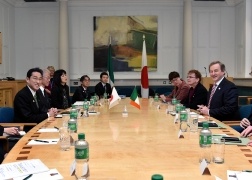 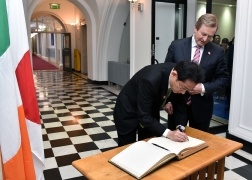 The Taoiseach Enda Kenny started by welcoming Foreign Minister Kishida’s visit to Ireland, and expressed his intention to make the most of the opportunity presented by the 60th anniversary of the establishment of diplomatic relations to develop Japan-Ireland relations still further.  Foreign Minister Kishida responded by thanking the Irish side for their warm hospitality, and expressed his agreement with further strengthening bilateral relations during the commemorative 60th anniversary year.

Minister Kishida referred to the importance of safeguarding the smooth business operations of companies in the UK and the EU and ensuring a level of predictability during the withdrawal process, as Taoiseach Enda Kenny agreed, and they confirmed that Japan and Ireland would work closely on the issue of the UK’s exit from the EU.  Furthermore, with fears growing over the increasing global trend towards protectionism, and in order for Japan and the EU to take the lead in the free trade system, it was confirmed that both countries would work together with the aim of reaching agreement in principle on the Japan-EU EPA as soon as possible.

Minister Kishida and the Taoiseach Enda Kenny also exchanged views on the United States and the administration of President Trump shortly to take office.