1. Speech by Charles Flanagan, Minister for Foreign Affairs and Trade 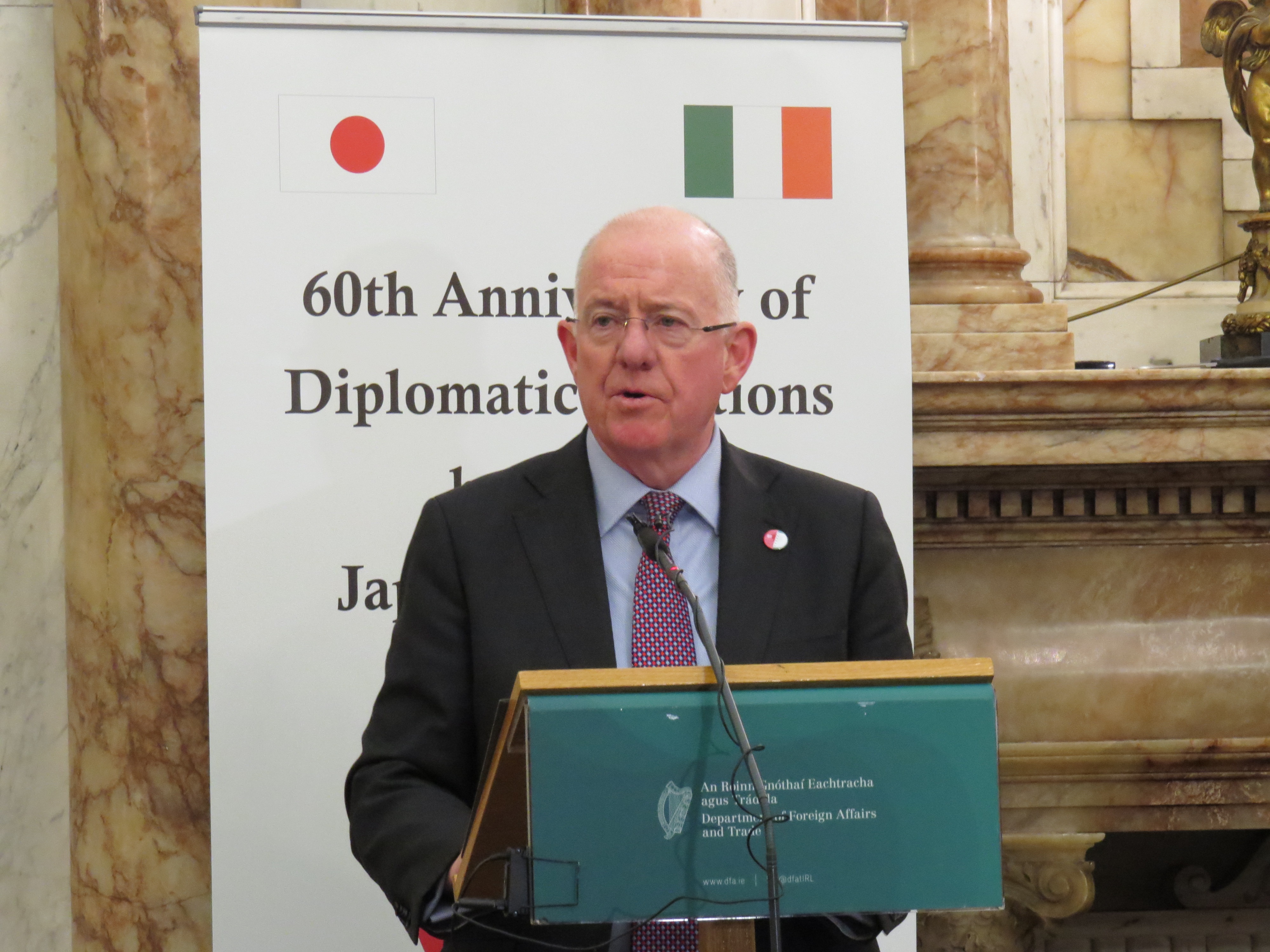 Starting with a reference to the meaning of 60 years in the Japanese calendar, Minister Flanagan said that this year’s 60th anniversary of diplomatic relations was an ideal opportunity to look back on past and present ties between Japan and Ireland, and to identify how they can be strengthened still further in the years ahead.  In addition, Minister Flanagan spoke about the history of the friendly relationship between Japan and Ireland going back beyond the last 60 years, and said he looked forward to relations growing ever stronger in areas including cooperation on the international stage, people-to-people links, trade and investment, and the UK’s withdrawal from the EU. 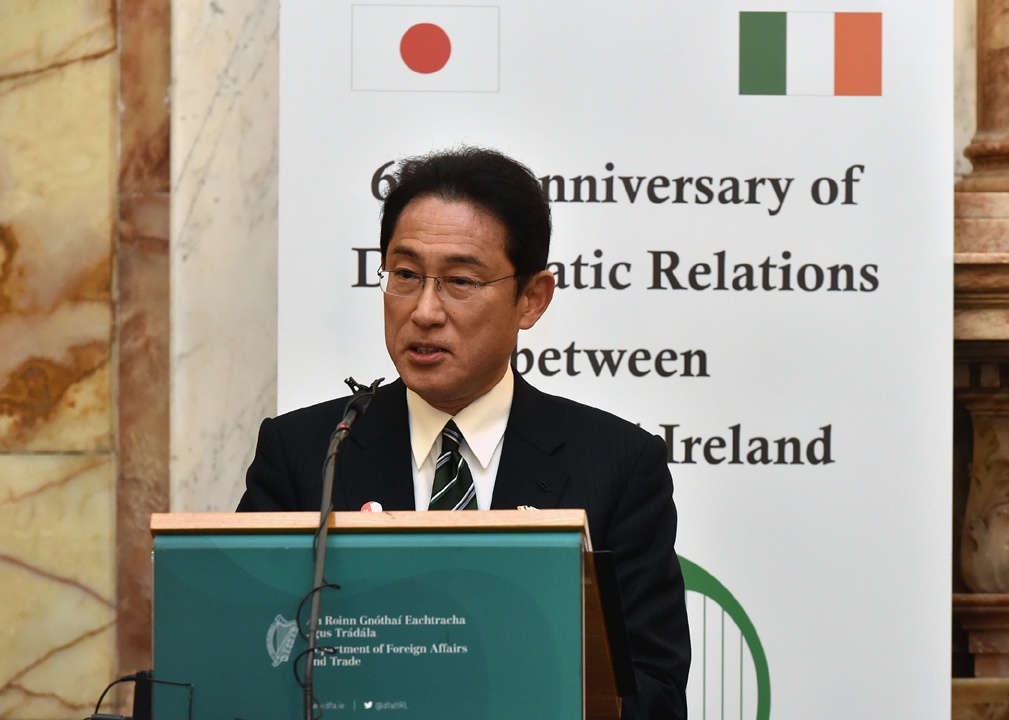 Minister Kishida followed by saying that on the basis of their shared commitment to democracy, human rights, and the rule of law, Japan and Ireland intend to work together for the cause of peace.  Minister Kishida referred to the many events taking place this year to commemorate the 60th anniversary of diplomatic relations, and as Minister Flanagan painted the left eye of a “daruma” doll brought from Japan by Minister Kishida, the two ministers wished for the success of the 60th anniversary of diplomatic relations.  (It is a New Year tradition in Japan to make a wish as you paint the left eye of a “daruma” doll, and to add the right eye when the wish has been fulfilled.) 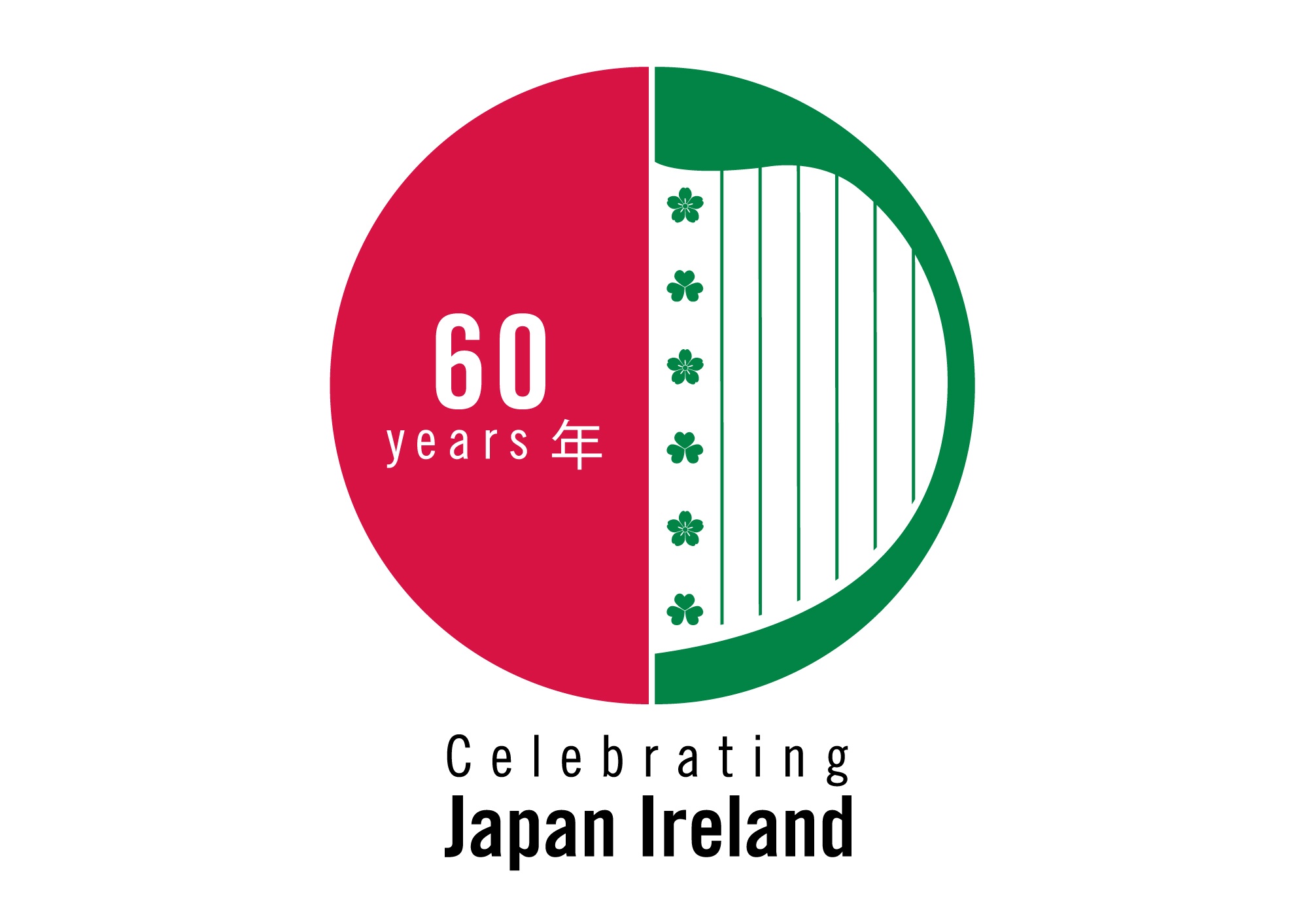 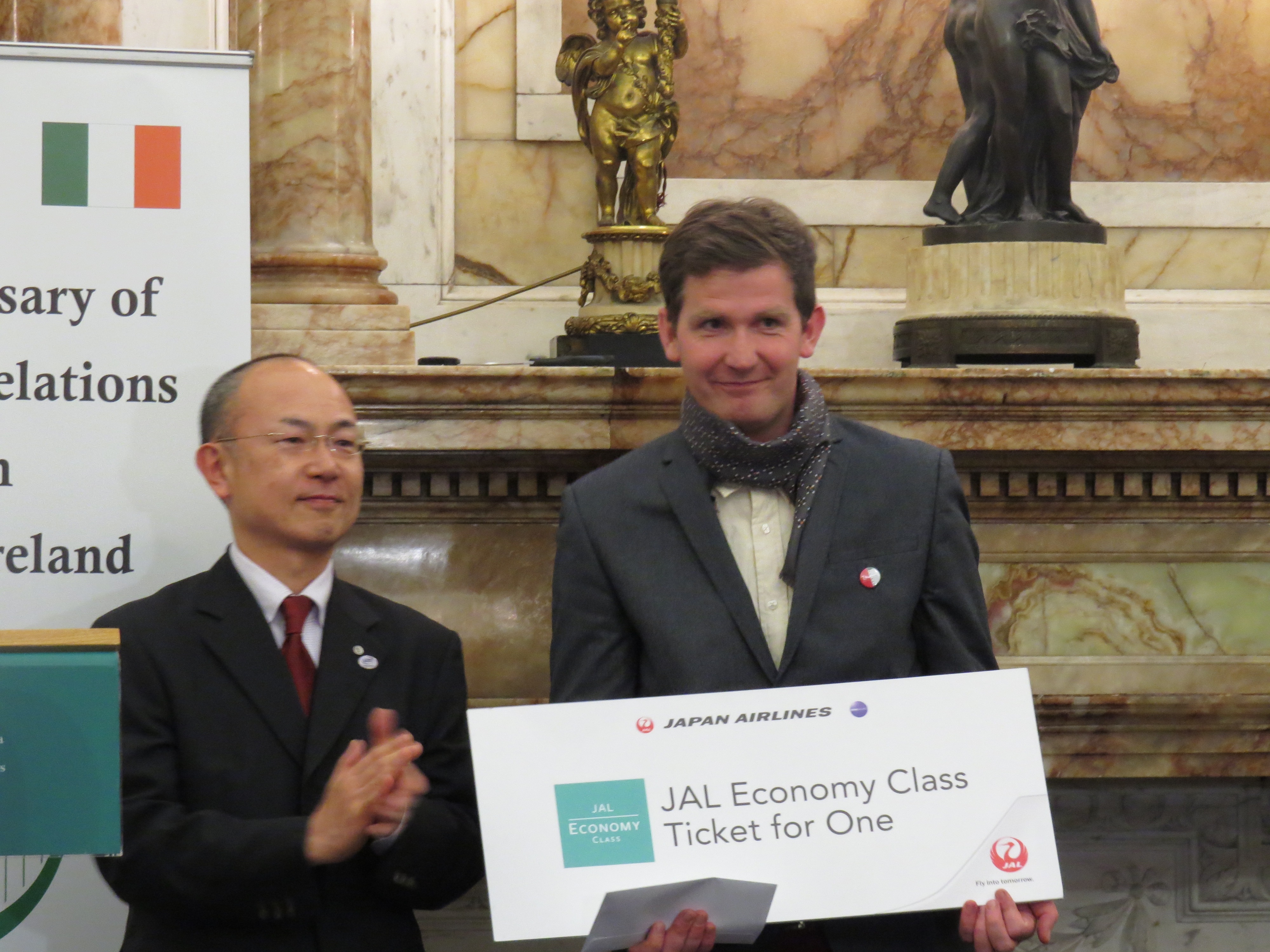 A return air ticket to Japan was awarded to Mr Peter McBride from Ireland, who created the winning design of the official 60th anniversary logo.  The logo was selected out of the 548 entries submitted, and represents the Japanese flag and the harp, Ireland’s national emblem. 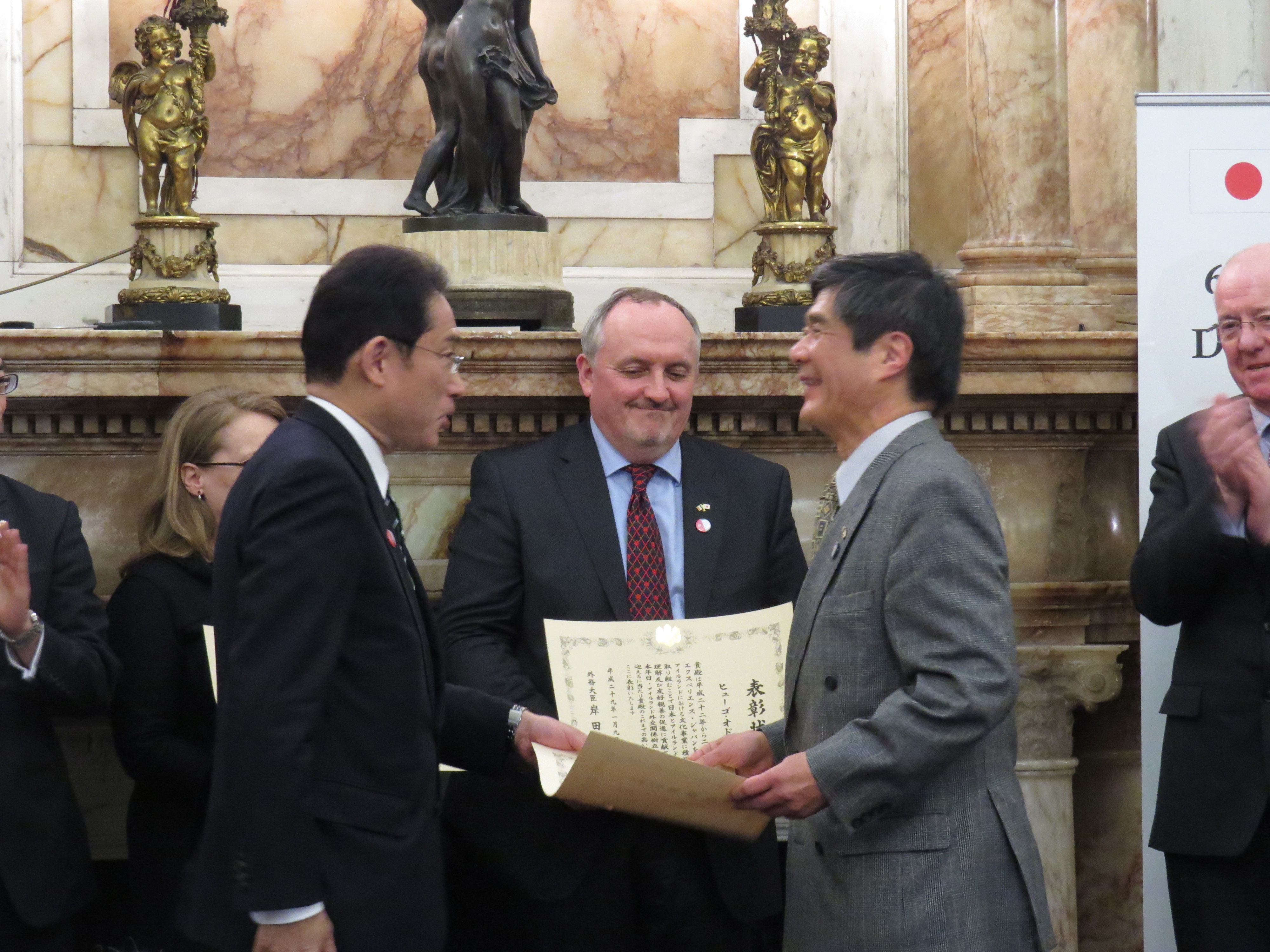 (2) Mr Hugo O’Donnell (Foreign Minister’s Commendation)
In 2010, Mr O’Donnell was appointed Chairperson of the Steering Committee of “Experience Japan”, the largest Japan-related cultural event in Ireland.  A record number of approximately 20,000 visitors attended the event in 2016, and it has made a major contribution to presenting Japanese culture in Ireland and promoting mutual understanding between the people of the two countries.

(4) Ms Barbara Geraghty (Letter of Appreciation)
Having taught English in Japan as a participant in the JET Programme and in other institutions from 1989, Ms Geraghty has taught Japanese language at the University of Limerick (in the west of Ireland) without interruption from 2000 to the present.  She has played a leading role in the development of Japanese language education in Ireland. 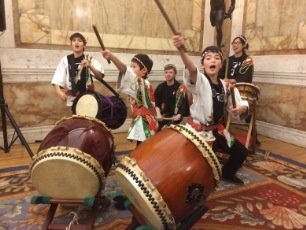 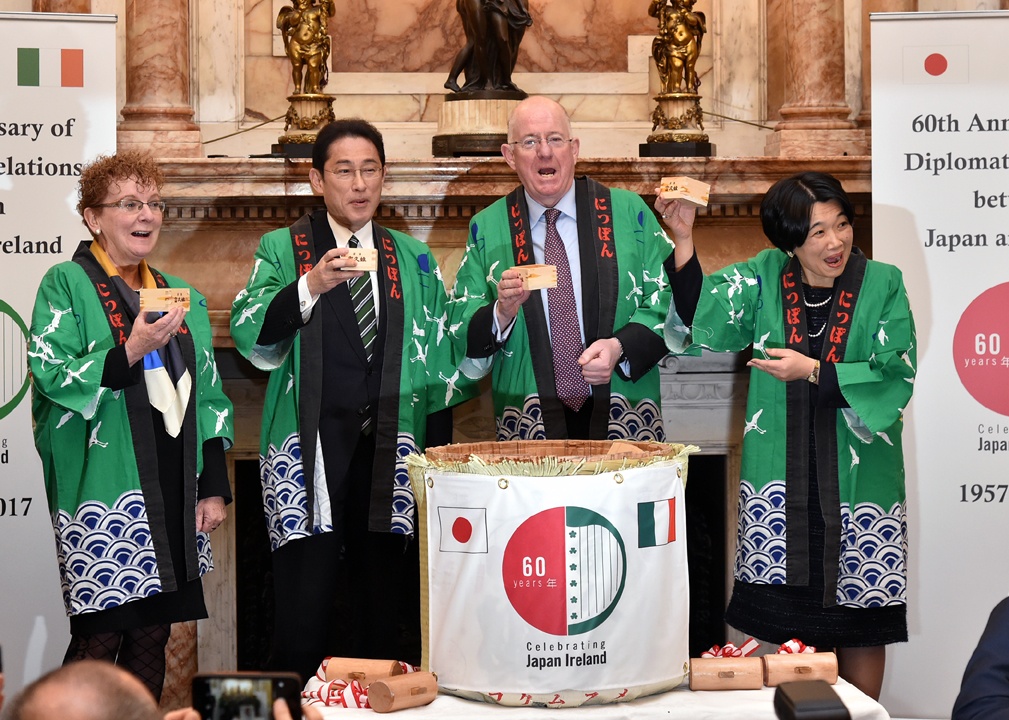 To finish, guests enjoyed traditional arts from both countries, with performances of taiko drumming and Irish dance.  The event then closed with a traditional sake barrel opening ceremony performed by Minister Kishida, Minister Flanagan, Ms Anne Barrington, Ambassador of Ireland to Japan, and Mrs Mari Miyoshi, Ambassador of Japan to Ireland. (Performed at celebrations, this ceremony is called “kagami-biraki” or “mirror-opening”, and involves breaking open the lid of a sake barrel with mallets and drinking the sake, symbolising good fortune.)