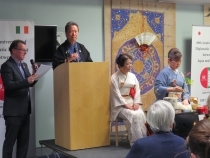 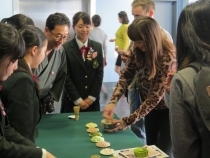 3 May – Speech by Mr. Ichiro Fujisaki, President of the America Japan Society

Mr. Ichiro Fujisaki, President of the America Japan Society and former Ambassador of Japan to the United States of America, gave a speech at the Institute of International and European Affairs (IIEA) on the current political situation in East Asia and Japan’s diplomacy and relations with the U.S.A. Following the lecture, there was a lively exchange of opinions on the topics discussed in the lecture. 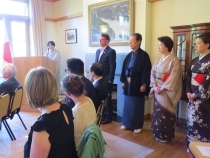 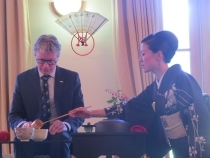 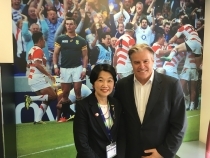 At the Embassy, the Irish Pair Go Championships with mixed pairs was held for the first time. Mr Koichiro Matsuura, President of the World Pair Go Association, travelled from Tokyo to present the prizes. 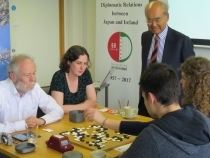 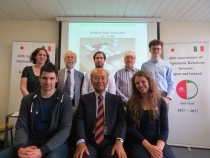 Ambassador Miyoshi visited World Rugby headquarters where she met Mr. Brett Gosper, CEO, World Rugby, and discussed this year’s Women’s Rugby World Cup to be held in Ireland in August and the 2019 Rugby World Cup in Japan. The draw for the 2019 tournament already took place in Kyoto on 12 May and Japan and Ireland were both drawn in Pool A. 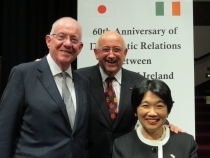 Ambassador Miyoshi, along with Irish rugby team head coach Mr. Joe Schmidt, was invited to Mitsubishi Electric Ireland’s 35th Anniversary Meeting where she made a speech.

A piano recital by Dr. John O’Conor, jointly organised by the Embassy and the Japan Business Society in Ireland, took place at the National Concert Hall. Dr. O’Conor is a recipient of the Order of the Rising Sun. Minister for Foreign Affairs and Trade Charles Flanagan TD and his wife also attended the recital. 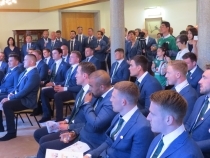 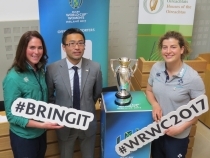 A send-off reception took place at the Ambassador’s official residence for the Irish rugby team who play test matches in Japan this June.

Ambassador Miyoshi, along with Tanaiste and Minister for Justice and Equality Frances Fitzgerald TD, attended Takeda Ireland’s new plant construction ceremony where she made a speech.