From 14th to 20th November, Mr. Micheal Martin T.D., Minister for Enterprise, Trade and Employment, led an Enterprise Ireland Trade Mission to Japan aimed at refocusing and strengthening Ireland’s trade with Asian markets.The mission was also used to further partnerships and sales opportunities for Irish companies with organisations in Japan.Participating companies were primarily from the IT, education, telecoms, engineering services, and seafood sectors.A new promotion programme for international education services, led by Enterprise Ireland and the International Education Board of Ireland (IEBI) was also launched during the visit. 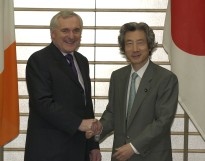 As President of the European Council, the Taoiseach, Mr. Bertie Ahern T.D., attended the 13th EU-Japan Summit in Tokyo on 22nd June.The Prime Minister of Japan, Mr. Junichiro Koizumi, hosted the meeting which was also attended by the President of the European Commission, Mr. Romano Prodi.The summit leaders reconfirmed the importance of forging a solid strategic partnership, and discussed issues relating to the peace and stability of the international community, while reaffirming their commitment to upholding the territorial integrity of Iraq.The summit also reviewed the implementation of the Action Plan for Japan-EU Cooperation adopted in 2001, and set priority actions to be taken by the next summit.

As part of the 25th Japan-EP Interparliamentary Conference, a delegation of 7 parliamentarians from the House of Representatives and House of Councillors of Japan, headed by Mr. Yoshimasa Hayashi, and including former Prime Minister of Japan Mr. Tsutomu Hata, paid an official visit to Ireland from 22nd to 24th April at the invitation of Ms. Mary Banotti M.E.P. During their visit, the delegation met with the Taoiseach, Mr. Bertie Ahern T.D., and the Tanaiste, Ms. Mary Harney T.D., and visited the International Financial Services Centre.

Mr. Tom Kitt T.D., Minister of State at the Department of Foreign Affairs (with special responsibility for Overseas Development and Human Rights), travelled to Tokyo on 5th April to co-chair a two-day Ministerial Conference on the Western Balkans on behalf of the EU Presidency.The Conference, organised by the Japanese government, reviewed the situation in the Western Balkans and examined how further progress can be made on the consolidation of peace and stability and the promotion of economic development.The meeting was co-chaired by Ms. Yoriko Kawaguchi, Foreign Minister of Japan.

From 18th to 19th March, Mr. Yoshiaki Harada, Senior Vice Minister of Education, Culture, Sport, Science and Technology, visited Ireland to attend the OECD Education Ministers Conference held at Dublin Castle.The conference was chaired by Mr. Noel Dempsey T.D., Minister for Education and Science, in his capacity as EU President of the Education Ministerial Council.The theme of the conference was Raising the Quality of Learning for All, and other themes discussed included Raising Performance Levels for All, Improving Teacher Supply and Effectiveness, and Education for Democratic Citizenship.

During an an official visit to Japan, Mr. Noel Dempsey T.D., Minister for Education and Science, met with his counterpart, Mr. Takeo Kawamura, Minister of Education, Culture, Sport, Science and Technology, on 12th March, and also attended the St. Patrick’s Day Parade in central Tokyo on 14th March.